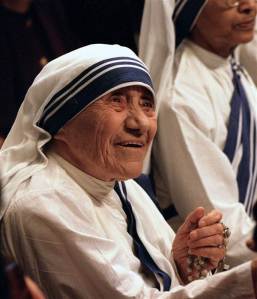 This weekend, Mother Teresa was canonized a saint.  Saint Mother Teresa is known world wide for her work serving those who are poor in Calcutta, India.  She founded a religious community, the Missionaries of Charity, that continues her work in areas of need around the globe including here in St. Louis.  The phrase, “I’m no Mother Teresa,” is a commonly used phrase meaning basically that the person is not as selfless and generous as Mother Teresa was.

As the date of canonization drew near, however, criticism abounded.  Some stated that Saint Mother Teresa offered only rudimentary care to patients and could have done more.  Others believe the attention she drew to herself and her fame took away from the greater issues at hand.  Some argued that Saint Mother Teresa’s attention to piety could have been tempered by more relational approaches.

It’s ironic to me that the things Saint Mother Teresa is most known for are also the things most criticized.  Isn’t that always the case?  Our greatest virtues also have a shadow side.  It’s part of being human.

I was at first a bit unsettled by all the critiques wondering if, in fact, canonization was in order.  However, I think it is exactly the reminder we need at this time.  Saints are human, too.  So often we put saints on a pedestal, raising them to some level of holiness we will never attain.  But, the reminders that even the saints have flaws and foibles, suffer from shortcomings and shortsightedness make it possible for me to keep striving for sainthood.  I can be impatient and stubborn.  I can see first what could be rather than celebrating what is.  I am learning to get good at saying, “I’m sorry.”  I am no Mother Teresa, but I do have gifts that God continues to grow in me for the good of God’s plan.  I am far from perfect.  But, Saint Mother Teresa got there.  Why not me?